Thinking of a Kruger Park self-drive tour? You can easily take your own car into and drive yourself around Kruger National Park. The road conditions are good and places are well sign-posted. 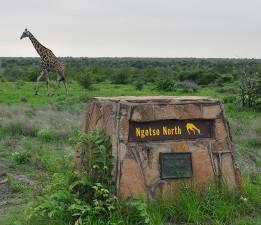 If you don’t have a car with you, but you still want to do a Kruger National Park self-drive safari, Skukuza Rest Camp has an Avis hire car office. Best to book your car in advance though because the office is only small.

You’ll have to arrange transport to get to Skukuza in the first place as well. There are private shuttle buses that can take you there from outside the park. You’d need to pre-arrange this so you don’t end up stuck with no transport!

Be wary, but not worried ;-), of driving on the dirt roads after a tropical downpour. You might get bogged in the mud! Some of the rest camps are only accessible from the dirt roads, so keep in mind that you might have to spend more time than expected getting to your destination.

There are lots of road junctions in the park and nearby places, like rest camps, picnic spots and dams, are clearly sign-posted. You’ll still need to know where you are in the big picture, so a Kruger National Park map will definitely come in handy for planning your route.

If you’re thinking of getting a map when you’re already in the park, the general stores at the main rest camps sell them. You might also be able to pick one up from a picnic spot.

If your fuel is getting a bit low, there are petrol stations at all of the main rest camps too. A tank lasts a long time in Kruger National Park, because of the slow speed limits. You won’t need to refill often or even at all on a shorter trip.

Once you’re in the park, you can only get out of your car at rest camps, picnic spots and specially marked places. It’s important then to make sure you have everything you need handy inside the car when you begin your Kruger National Park safari drive, like:

You’re bound to see a lot of wildlife as you explore Kruger National Park. Always slow down whenever you see some on the road.

Generally, animals will watch a car approach then move away into the bush. That’s everything except elephants (and possibly buffalo and rhinos)! Always give elephants right of way on the roads, even if it means having to reverse for 20 minutes while an elephant keeps walking towards you, as we had to once!

Now that we’ve got the important Kruger Park self-drive tips out the way, motor on and have a wonderful safari!

The cookies that are categorised as necessary are stored on your browser.  They are essential for the website's basic functionality.