A wide variety of antelope call Kruger National Park home. “Buck”, as locals tend to call them, vary in height from 40cm-183cm (1.3-6ft) at the shoulder!

After a very short time in Kruger National Park, you’ll notice that impala are the most common type of buck. There at least 125,000 of these black-healed beauties in the park!

No matter how many impala we see, they enchant us every time.

Interestingly, female impala are able to postpone giving birth by up to four weeks!

Kudus are without doubt, the most majestic of all buck. You must agree when you see a male kudu standing proudly, crowned with his spiral-shaped horns! Kudu have excellent camouflage and blend in with the dull colours of the savannah. You’ll find them in small groups, often in very dense bush. Be careful not to confuse them with the similar, but darker nyala.

The easiest way to identify a waterbuck is by the white ring around its bottom. We always say it looks like they sat on a toilet seat that had just been painted ;-). Although their name indicates otherwise, you won’t only see them near water.

If you’re further north in Kruger National Park, keep an eye out for the stunning black sable antelope. They’re quite rare and there’s no guarantee that you’ll see one on a Kruger trip. You may see their brown cousins, called the “roan”. Another type to look out for up north is the tsessebe. It’s the fastest buck in the world. It can run at up to 70km (43.5 miles) per hour! 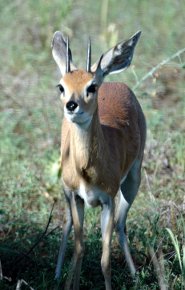 Several smaller buck species are found throughout Kruger National Park. They’re more difficult to identify because they look similar. You may want to get a book on mammals of Southern Africa to help identify them. Some smaller buck you might come across are:

The largest buck in the park, and in fact the world, is the eland. There are only 300 in Kruger National Park, so they aren’t a common sighting. You can identify them by their size and short, twisted horns. The blue wildebeest is also large, but far more common than the eland.

The cookies that are categorised as necessary are stored on your browser.  They are essential for the website's basic functionality.